All About Handwoven Rugs. 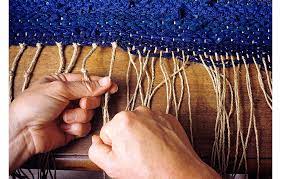 There are several rugs, but the most common are made of a thick material and intended to be used on the floor. Before introducing machine-made items, it was once acceptable to use the term “carpet” for any cover, including a tablecloth or wall hanging.

It is differentiated from carpet, frequently tacked down to the floor and usually covered.

Handmade modern rugs are pieces of art as well as valuable products. Indeed, many oriental carpets have achieved such heights of creative expression that they have been held in the same respect in the East as objects of remarkable beauty and luxury. Whereas, in the west, they were regarded as masterpieces of painting.

Designs generally consist of an inner field—the pattern in the centre of the carpet—and a border. The latter helps, as the cornice on a building or the frame on a picture, to emphasise the bounds, isolate the field, and occasionally govern the inferred motions of the internal pattern. The inner field and border design must match while staying unique.

Inner and outer guard stripes are secondary bands on each side of the rug’s central band, varying in width based on the design’s size and complexity. Both sides of the main band can have similar or distinct guard stripes. Allover patterns, panel compositions, and medallion systems are the most common ways to decorate the field.

It can be applied to the carpet directly from the weaver’s imagination and hands or indirectly from a design sketched on paper. With this method, the design may be converted to a cartoon first, and then a rug is made from the pattern. Squared full-size paper drawings depict individual coloured knots in the cartoon. The weaver begins by placing this on the loom and then translating the design onto the carpet by hand. The cartoon is used as a master template for the fabrication of several carpets and the reproduction of highly elaborate designs. It is considered that many of the most extraordinary oriental carpets have a stunning impact due to their intricate detailing, which was created by text illuminators. As a consequence of these ways of transfer, the modern rugs have a unique charm that is a product of the artist’s unique aesthetic vision.

Only natural dyes were utilised from the earliest periods through the late 19th century. Other sources included molluscs and insects; some were found in plants like indigo and sumac. Chemicals like alum have been added to several to fix the colours in the fibre. For the most part, natural dyes have shown to be great, except for dark brown to black colours, which have a high iron-oxide component that commonly decomposes fibres. The subtle variations in colour and tone achieved by using natural dyes, known as abrash in the trade, add to the appeal of vintage carpets.

Materials and techniques are the focus of this section.

Modern rugs manufactured of sheep’s wool, which is long-lasting and easy to work with, make up most of the market. Camel hair wool and goat wool are not commonly used in the textile industry. If you want to produce a beautiful pile using cotton but not for the entire foundation or just the warp, you’ll have to utilise it as a warp.

No other material can generate carpets as sumptuous and beautiful as silk, so its usage is widespread. In some of the most extraordinary Persian carpets of the 16th and 17th centuries, silk is the only material used.

What actually are the advantages of Metal Roofing for Your Homes in Sydney?

How to Find the Perfect Betta Fish for Your Home

How to Make Square Sock Fold